Medical Helicopter Crashes in Florida with 3 Onboard

Three people, a pilot and two medical personnel, lost their lives monday morning when their helicopter went down. The aircraft was en route to the Shands at University of Florida in Gainesville. The flight, which originated at the Mayo Clinic in Jacksonville at 5:45 a.m., did not have a patient on board.

The accident site is located on the Clay and Putnam county line near Palatka in Northeast Florida.

No injuries reported in helicopter crash 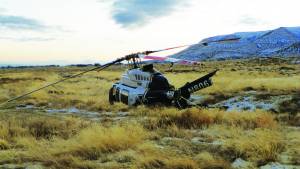 No one was injured in a helicopter crash north of Rock Springs, Wyoming early Tuesday evening. At the scene, Sheriff Rich Haskell said Undersheriff Craig Jackson was on Yellowstone Road about 3 miles north of the city when he saw a helicopter circling west of the roadway around 6 p.m. He then observed the helicopter drop straight to the ground from a relatively low altitude.  Jackson investigated and found the craft to be a Guardian Flight helicopter with five people aboard, none of whom were patients. None were injured in the crash. Haskell said federal officials are being notified and will be in charge of the investigation. He said he planned on releasing additional information on Wednesday.

Information from: Rock Springs Rocket-Miner
Posted by Steven Sweeney at 9:41 AM 3 comments: