Mandy Shiraki, Danny Villiaros, and Ron Laubacher departed for the island of Hawaii to transport an injured child. The aircraft did not reach their destination, an overdue aircraft EP was followed. I think anyone who knew Mandy would agree, I was sure they would find then on the ground somewhere, a little beat up, but Mandy would emerge with a makeshift splint on a broken leg, carrying Danny over one shoulder and Ron over the other. Mandy was invincible and this would surely give him stories to share for a long time to come.

The wreckage was located February 2 with no survivors. This was devastating news for many people. This was the 2nd air ambulance accident in Hawaii's history. Mandy was (and still is!) a cornerstone in local EMS. Mandy's parents, sisters, daughter, sons, grandson, wife, many nieces and nephews and countless friends miss him deeply.

Danny Villiaros always had a smile on his face and laughed easily. He was a paramedic-firefighter who recently was granted an award for bravery when he unarmed a patient he encountered, protecting his fellow fire fighters from harm. Danny was the newbie at the job, but we have all known him for years. Danny left behind a large extended family, a daughter, son, and also countless friends that mourn his loss.

Ron Laubacher was from the mainland but fit in well here. He was a pilot we enjoyed flying with, one of the "team". He had sharp wit, a sarcastic humor, even as a pilot he understood and participated in our medical humor. Ron was a single social butterfly. He had many friends and always had a lot of fun when he wasn't flying. I teased him I enjoyed living vicariously thru his stories. Ron's family and many friends miss him tremendously. 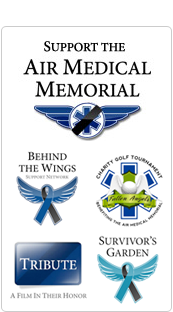